In 2005, a year before I officially retired from DFO, I started a review paper on Pacific salmon and estuaries. That year I visited colleague Nils Arne Hvidsten at the Norwegian Institute for Nature Research (NINA) in Trondheim, Norway. While working at NINA I was exposed to the international literature on anadromous salmonids so I decided to expand the book to give a world wide treatment of salmonids in estuaries. It was a long haul with many revisions but with the help of Randy Schmidt great editor at UBC Press, assistance from Dr Laura White as a reader, and anonymous reviewers, the book was finally published in August 2016. 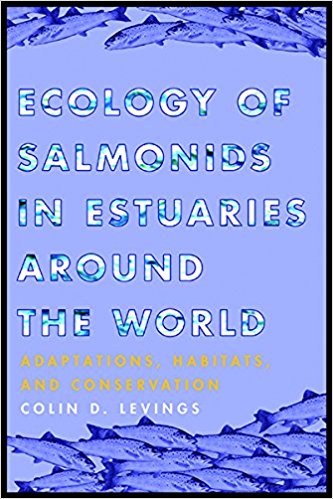 The following link will take you to UBC Press for further information on the book, sample chapter, ordering information, and endorsements.
https://www.ubcpress.ca/ecology-of-salmonids-in-estuaries-around-the-world

I wrote an article for an international flyfishing website to describe how my early sports fishing trips with my family in 1950s was probably related to a career as a biologist – culminating in writing the book.

“A personal journey from a kid fly fishing off log booms to a marine ecologist and author of a book on trout, salmon and char in estuaries around the globe”

Review of the book by Dr Jim Irvine, Pacific Biological Station, Nanaimo, BC. Published in the Bulletin of the North Pacific Anadromous Fish Commission.

Ecology of Salmonids in Estuaries Around the World: Adaptations, Habitats, and Conservation – book review by Jim Irvine
(January 2017)

This book pertains to the salmonid fishes that depend on estuaries for parts of their life cycles. The work is written by Levings,scientist emeritus, Department of Fisheries and Oceans’ Centre for Aquaculture and Environment Research in West Vancouver, BC.Upon his retirement, the author found research support that enabled him to travel to parts of the world where estuaries supported salmonid fishes belonging to the genera Salmo, Oncorhynchus, Salvelinus, and Hucho. He examined estuaries in the North Pacific and North Atlantic and several in the Southern Hemisphere. His travels and consultation with colleagues enabled Levings to write a book that fills an important gap in the knowledge of estuarine ecology and suitability for the support of salmonid populations. Most large estuaries also serve as harbors for ship traffic and have huge human populations. These factors have affected the fishes to the point where many species have undergone drastic population decreases. This conservation problem is skillfully discussed by the author. In addition to its considerable scientific value, this handsome volume is well written and illustrated. It is a credit to the author and the University of British Columbia Press.

Review by Bert Ionson in the Ormsby Review (#113)

The book won the K.D. Srivastava prize as the best book published by UBC Press by an UBC-affiliated author in 2016, as judged by the Press and UBC Office of the Vice President, Research.

A description of the book and a brief biography was published on the BC Bookworld website
http://bcbooklook.com/2016/12/27/learning-with-levings/

Public lecture given in Campbell River December 7, 2016 at the Maritime Heritage Centre, sponsored by Discovery Passage Aquarium and Department of Fisheries and Oceans.

An interview on November 17, 2016 with Dr John Nightingale from the Vancouver Aquarium